PORT ST. LUCIE – City Manager Russ Blackburn today unveiled his proposed budget for the next fiscal year, including a recommended millage rate decrease for Port St. Lucie residents for the fifth year in a row.

The proposed budget supports the City’s strategic goal to be a high-performing organization and its initiative to reduce the city’s tax rate while ensuring a balanced budget that still provides excellent service for city residents.

“Current events have made drafting the proposed budget very different from past years. The COVID-19 pandemic has resulted in significant turmoil and uncertainty in the business community and with our constituents. No one knows what the economic impact ultimately will be to the world, the United States and Florida,” City Manager Russ Blackburn said. “Fortunately, the financial decisions made by this City Council has positioned the City to remain financially sound. We will continue to remain vigilant, monitoring, and reacting to current trends and facts as they occur to enable a plan of response that will minimize impacts on service levels.”

The proposed budget recommends a total spending level of $536.4 million for all funds for the fiscal year that begins October 1. The total proposed FY 2020-21 City budget represents an increase of 18.7% compared to the FY 2019-20 adopted budget.

The fluctuations relate primarily to increases in capital projects of $43 million. Capital projects include $45 million of utility infrastructure improvements; an increase in construction for The Port project; and advancing the payment of improvements to Port St. Lucie Blvd. Phase 2 (Alcantarra to Darwin), which will be reimbursed in future years by the Florida Department of Transportation. Also adding to the increase are the growing taxable values and the addition of 13 new staff members to the General Fund. These include nine (9) new sworn police officers and conversion from a civilian to officer.

The City Council will review the draft budget in detail during its summer retreat on July 22, 23 and 24. These sessions will be televised live on the city’s website and on Channel 20 on Comcast and Blue Stream Fiber and Channel 99 on U-Verse.  The final budget will be adopted in September after two public hearings.

When looking at a tax bill in St. Lucie County, it is important to keep in mind that the City of Port St. Lucie’s millage rate represents just one portion of it. Because of that and rising property values, the total amount paid by homeowners can vary every year. Other local taxing authorities include, the St. Lucie County School District, St. Lucie County, St. Lucie County Fire District and the South Florida Water Management District.

The City Manager’s full proposed budget and budget-in-brief can be found at www.cityofpsl.com/budget. 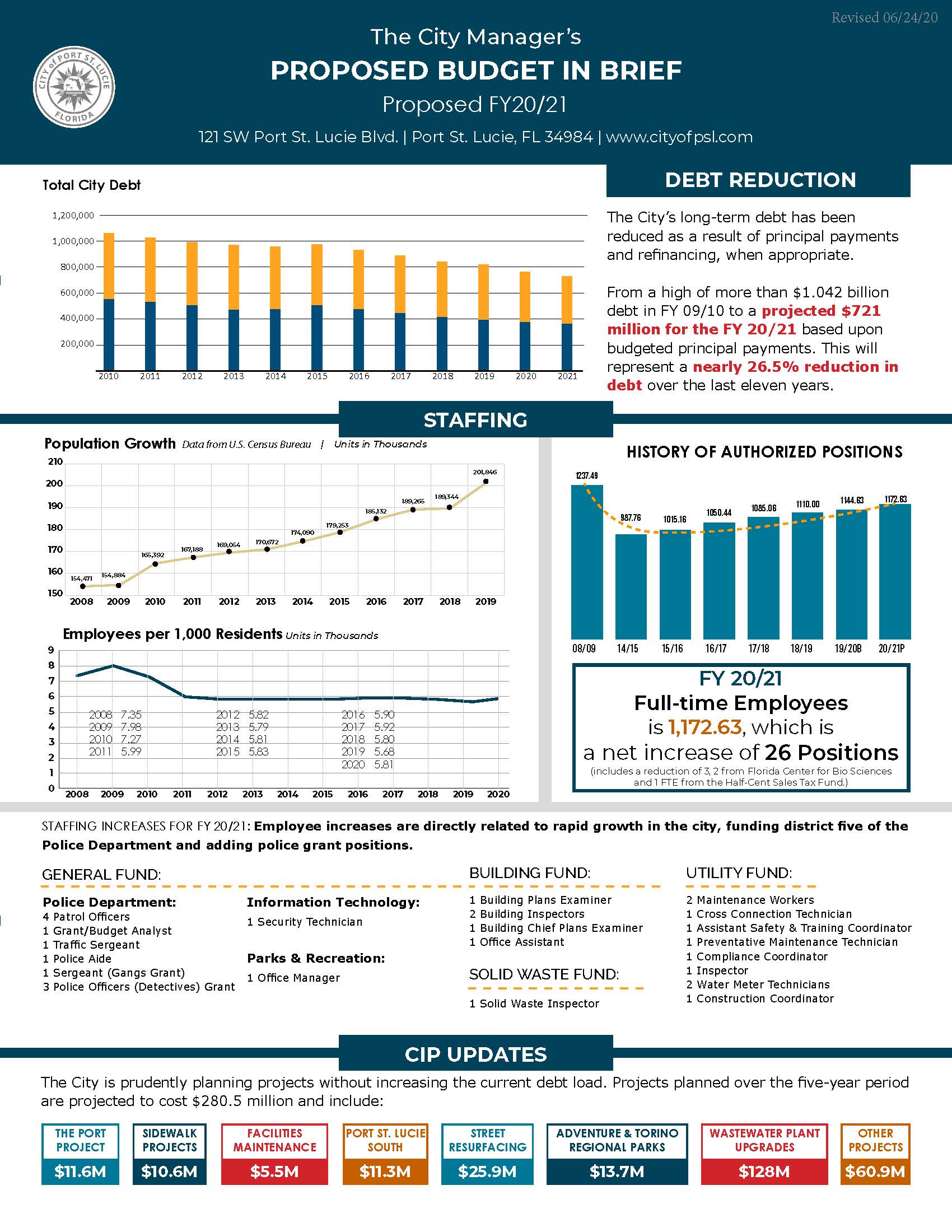