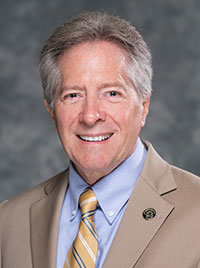 Russ Blackburn is a native of North Augusta, South Carolina. He graduated from Valdosta State University with a Bachelor of Arts degree in Political Science and earned his Master of Public Administration degree at Georgia Southern University.

Russ has served as a leader in Florida City and County government for most of his career.  Most recently, he served as City Manager of Gainesville, Florida. During his 10+ year tenure, Gainesville was selected as the number 1 city in America by Cities Ranked and Rated. He has extensive experience in organizational development and redevelopment of aging downtowns and neighborhoods. A theme throughout Russ’s career has been a public/private partnership. Through a 90-day collaborative process, the City of Gainesville, Chamber of Commerce, University of Florida and, private property owners established an Innovation District which is on the way to accommodating over 5,000,000 square feet of commerce and housing.

Russ is at home on the Treasure Coast, having served for 8 years as County Administrator of Martin County, Florida. Recurring citizen surveys during Russ’s tenure indicated the level of trust citizens had in County government and state increased by over 43%. Russ was also able to restore credibility to the Capital project construction process, completing the award-winning

Mr. Blackburn was selected by his fellow local government managers as President of the 600-member Florida City/County Management Association. He has served on the Florida League of Cities, Board of Directors and is a two‐time winner of the League’s Home Rule Advocate Award. He is a Credentialed Manager of the International City / County Management Association. While serving in Martin County, Russ and the Stuart City Manager won the ICMA’s prestigious Intergovernmental Partnership Award.

As an engaged member of the community, Russ has served as a Board Member and Campaign Chair of United Way. He is a member of Rotary International and served as President of the Leesburg, Virginia, Daybreak Rotary Club.

Russ is married to Arzella who is a speech-language pathologist. They have one daughter, Erin, who recently earned her Master’s Degree from the University of Florida.

Free viewers are required for some of the attached documents.
They can be downloaded by clicking on the icons below.