Click Here for Information on the New Configuration at Floresta Drive.

Several commitments were made to help minimize the impacts of the project to the community and environment. The commitments are tracked by the Construction Engineering Inspection (CEI) team throughout the project. The Project Commitment Tracker is updated regularly and includes the status for each commitment.

The City of Port St. Lucie selected a project specific team to assist in overseeing, designing and constructing the Crosstown Parkway Extension Project.

This map represents the project area for the Crosstown Parkway Extension Project.  Click on the map to navigate through the project and local area using google maps. 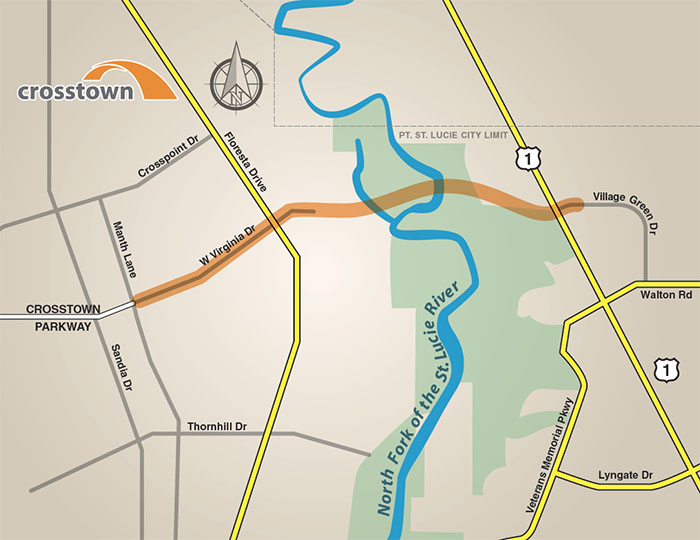 History of the Project and Documents

The need for an additional crossing over the North Fork of the St. Lucie River has long been recognized, dating back as far as 1980.

With this ruling, the City was able to move forward with property acquisition efforts and construction of several environmental improvement projects in state recreation areas that must be completed before construction of the bridge begins.

Lessening the impact on the environment during construction is extremely important. In order to meet mitigation requirements for this project, any property cleared will be recreated on site or at another location.

Platts Creek Compensatory Mitigation: The Platts Creek Compensatory Mitigation (PCCM) project scope of work included the construction of 47.87 acre of wetland mitigation within a 102-acre parcel. The proposed mitigation area was a joint effort between St. Lucie County and the City of Port St. Lucie. The City used credits associated with half of the site towards the regulatory wetland mitigation required for the Crosstown Parkway Extension project. The County will use the remaining credits towards future projects with unavoidable wetland impacts. The proposed mitigation activities within the PCCM include the following: 13.54 acres of Hydric Hammock 23.10 acres of Depression Marsh, and 12.70 acres of Floodplain Swamp. In addition, two Mesic Flatwoods areas, totaling 13.65 acres, will be provided as a buffer between the mitigation site and the stormwater facility, development to the north and Sunrise Boulevard.

Canoe/Kayak Launch: The project relocated the existing facility approximately 1000-feet south. The improvements included paved access road & parking area and ADA-accessible canoe launch. The project also included a 5-acre habitat restoration area creating scrub and scrubby flatwoods which are conducive for scrub-jays. Scrub-jays have not been recorded within the North Fork of the St. Lucie River since 1984.

The habitat restoration area is approximately five acres in size and was also utilized for gopher tortoises that were relocated due to the construction of the canoe launch improvements.

Savannas Recreation Trail: This project constructed a trail starting at the Savanna Recreation Area Campground located on Midway Road. The trail is a segment of the East Coast Greenway which is a multi-state trail that connects Calais, Maine to Key West,Florida.

Water Quality Projects:  Sedimentation will be removed from Evans Creek and two oxbows in the North Fork of the St. Lucie River. The removal will provide improved flows and hydration of the surrounding wetlands.

For more information regarding reports or documents from the PD&E, please submit a Public Records Request.

The City and the Design/Build Team presented information on the Crosstown Project and the innovative design solutions at the 2016 Public Works Expo for the American Public Works Association Florida Chapter.
Download the Crosstown Parkway Extension: Innovations through Design-Build Presentation 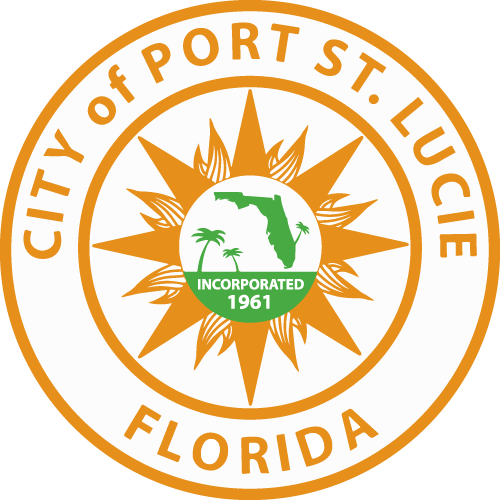