There's no way around it - roundabouts are an effective safety countermeasure.

The State of Florida has set forth traffic control regulations in Chapter 316 of the Florida Statutes, and, except where specifically permitted within the statutes, all local governments must follow
this code.

The basic reference in the code is the Manual on Uniform Traffic Control Devices (MUTCD) issued
by the Federal Highway Administration. The MUTCD has been endorsed by the Institute of Transportation Engineers and is used as the basis for much of the case law pertaining to traffic control devices that has been decided in the United States over the past several decades.

Traffic control devices include traffic signals, traffic signs (e.g., stop signs and speed limit signs), and traffic pavement markings. The MUTCD contains all the design, application, placement, standards, guidance, options and support provisions for traffic control devices. The purpose of the MUTCD is to provide uniformity of signs, signals and pavement markings in order to promote roadway safety and efficiency on streets and highways. Uniformity of devices aids road users in the recognition and understanding of traffic control devices and reduces perception/reaction time. The MUTCD explains the term uniformity by stating that "Uniformity means treating similar situations in a similar way".

The MUTCD also states that traffic control devices "should be designed so that features such as size, shape, color, composition, lighting or retroreflection, and contrast are combined to draw attention to the devices; that size, shape, color and simplicity of message combine to produce a clear meaning; that legibility and size combined with placement, permit adequate time for response; that uniformity, size, legibility, and reasonableness of the message combine to command respect" and that such traffic control device actually fulfills a need.

There are five basic requirements for all traffic control devices; they must:

The MUTCD applies to all roads and streets in the United States and is the national standard for all traffic control devices installed on any highway, street, bike way or private road that is open to public travel. 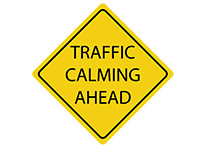 The City of Port St. Lucie is committed to ensure the overall safety and livability of residential neighborhoods. One way to meet this commitment is through a collaboration of city staff and property owners in an effort to minimize the impact of traffic on neighborhoods.

To develop the draft Traffic Calming Policy, staff researched and gathered adopted Traffic Calming Policies from similar municipalities throughout Florida and the United States and incorporated their adopted guidelines and thresholds as a starting point. After the draft was complete, a public involvement workshop was conducted by staff to solicit comments and concerns on the proposed policy. In addition, the draft Policy was made available on the city’s website and a dedicated email address was established to allow residents to comment on the Policy if they were unable to attend the workshop. After a six-month review period, comments were reviewed and incorporated (as applicable) into the Final Policy.

To initiate a request for traffic calming, a resident, private developer or City staff can submit a Traffic Calming Request Form (and associated petition) via email to TrafficCalmingRequest@cityofpsl.com, or via mail:

Free viewers are required for some of the attached documents.
They can be downloaded by clicking on the icons below.