The City of Port St. Lucie has historically been a leader in recognizing impacts of septic systems and storm water management on our natural resources.

The graph below shows connections to sewer from 2008 to 2019 including conversion and new installs. *1,877 conversions completed this year as of December 2019. The City of Port St. Lucie had a vision for the rapidly growing community, even before acquiring its utility assets in 1994, and developed a plan of action to expand the once-limited water and sanitary sewer utility services. The Sewer Expansion Program would ensure that failing septic systems could be taken out of service to avoid further contamination to the shallow water supply and that newly constructed homes and businesses would be required to connect to City sewer. The City’s low-pressure wastewater collection system has grown to be the largest of its kind in the nation and quite possibly, the world. The innovative program has also become a model for other utilities across the globe.

In 1994 the Utility was serving just over 10,000 wastewater customers. Driving the City’s determination to expand the utility system was the clear understanding that the continued construction of up to four septic systems per acre was jeopardizing the health of the environment and that of thousands of residents. The septic systems threatened to pollute the ground water supply and contaminate private shallow aquifer wells, the only source of residential water at that time. When a resident needs or desires to connect to City sewer, the homeowner can finance their connection fees over a 10-year period with no interest. The City provides all the materials and necessary labor to connect to the low-pressure sewer system from the home’s plumbing to the grinder pump, then to a pipe network in the street. The connection fee not only covers connection costs, but it also covers the reservation of capacity in the wastewater treatment facilities for each residence that is connecting to the City’s system.

Since the City embarked on the unparalleled Sewer Expansion Program 25 years ago, Port St. Lucie’s corporate limits have expanded from 80 sq. miles to 120 sq. miles, growing in population to more than 195,000 residents. Sewer customers have increased from 10,000 to over 59,000. Because of new construction requirements, more than 24,000 septic tanks have never been installed, and 8,700 aging and/or failing septic tanks have been taken out of service. To date, the new grinder pump installations have diverted more than 20 billion gallons of wastewater to the treatment facilities, whereas without the new low-pressure systems, the wastewater would have gone to septic tanks with a possibility of leaching into the community’s ground waters. More than 17,000 septic systems are still in service within the City’s Utility Service Area and monitoring their locations, particularly the ones located within 50 ft. of a waterway, prompted the Utility to conduct an analysis in 2017. As residential conversions are completed, the location map is updated for our continued monitoring.

Elected officials and utility representatives from across the nation and around the world, including, but not limited to Port Charlotte, Cape Coral, and the Bahamas, have inquired about the Sewer Expansion Program. Others have visited Utility Systems to discuss and observe the City’s low-pressure wastewater collection system and the ways in which it was implemented and how it’s being maintained. 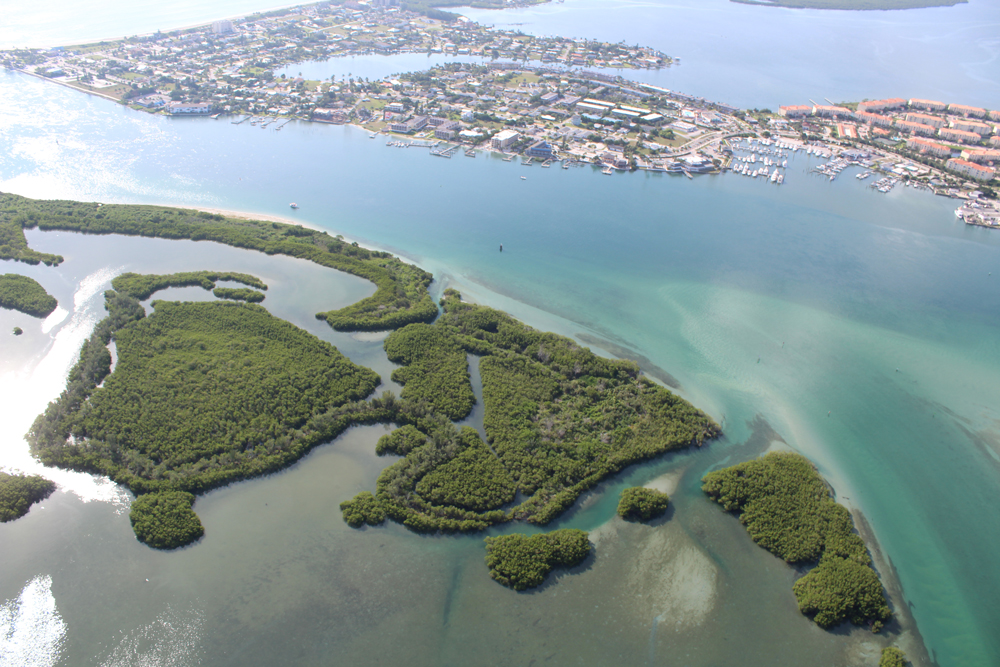 Utility Systems continues to convert remaining residential septic systems upon their failure or the homeowner’s desire to connect to City sewer. And as this innovative program has been expanding since 1994, the area’s natural water resources are even more protected, minimizing the potential for contamination from septic systems. Residents, visitors, City staff, City Council, and State Representatives alike are extremely passionate about the health and well-being of this community and the beautiful North Fork of the St. Lucie River which bisects it. They support any effort to keep septic tank leakage from seeping into shallow aquifer wells and groundwater which leads to the river.

EWIP is a multi-faceted and innovative way to solve stormwater issues in eastern Port St. Lucie. The larger stormwater treatment areas have dual and triple uses. The overall project combines a stormwater management facility and several different water quality solutions. It also establishes an area for recreation, assists in reducing infrastructure costs for residents while improving their quality of life. These improvements provide high levels of water quality while providing significant stormwater management and flood protection.

In the midst of an ongoing debate about large-scale, statewide answers to the problems that plague the health of the St. Lucie River and the Indian River Lagoon, City leaders have been working to find local solutions.  The City of Port St. Lucie broke ground in late 2017 on the McCarty Ranch Extension Water Quality Project --which, when complete, will keep up to 21 percent of nutrient-laden excess freshwater discharges out of the C-23 Canal from entering the North Fork of the St. Lucie River.

“The people of Port St. Lucie have repeatedly stepped up to the plate on water issues, whether it was creating a state of the art water and wastewater utility, carrying out one of the largest septic tank conversion programs in the country, or completing the $36 million Eastern Watershed Improvement Project; and, they are ready to do it again now,” Port St. Lucie Mayor Greg Oravec said. “The McCarty Ranch Extension Water Quality Project is a difference-maker, and it demonstrates that cities, seizing local opportunities, can be the agents of positive change, change that reaches far outside of city limits.  At the same time, it also reminds us of how much more we can accomplish when we the people and our institutions are united in purpose. “

Overall, the project will take approximately 1,871 acres of fallow citrus grove and convert it to a shallow water storage facility, consisting of seven reservoirs. These reservoirs will be capable of receiving water diverted from the C-23 Canal, along with capturing an annual average of 53 inches of rain on the property, reducing the need to discharge into the North Fork.

The National Pollution Discharge Elimination System (NPDES) is a national permitting program designed to control the pollutants discharged into the surface water such as lakes, ponds, streams and even the ocean. Improvement in our nation’s water quality can become a reality through public education and awareness, and through the implementation of steps that avoid or mitigate the problems associated with water pollution. Stormwater pollution is a major contributor to the degradation of our rivers and oceans. Nationally, a trend of steady development in coastal areas has led to rising population densities and degraded water quality. Accordingly, as the City of Port St. Lucie and surrounding areas have grown, the North Fork of the St. Lucie Estuary (North Fork) has experienced increasingly polluted waters. In particular, bacterial concentrations have exceeded public health standards, leading to multiple closures of the system for recreational use. To address these issues, the Port St. Lucie City Council initiated a microbial source tracking study in 2016 through a partnership between Harbor Branch Oceanographic Institute-Florida Atlantic University (HBOI-FAU), CPSL, St. Lucie County, St. Lucie County Department of Health, and Florida Department of Environmental Protection (FDEP). The purpose of the study was to improve understanding of the sources contributing to this recurring bacterial and nutrient pollution. The results of the first phase confirmed that elevated fecal indicator bacteria concentrations occurred at many sites in the North Fork. The greatest concentrations consistently occurred in densely urbanized areas, including White City Park and canals in CPSL (Sagamore, Hogpen Slough, Veterans Memorial, Elkcam, and Southbend/Horseshoe A-22). The City Council approved the initiation of the second phase of the study in the summer of 2018, in which Harbor Branch scientists will focus on a more detailed study of sites that showed higher levels of bacteria and other pollution. It also will study and monitor the interactions of septic systems and surface water and will help distinguish between nutrient sources, such as wastewater, storm water runoff and fertilizers. The ultimate goal is to use the results from the second phase of the study to create local solutions.