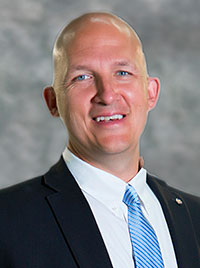 Greg was first elected Mayor in November 2014; and in 2018, he became the first Mayor in the City’s history to be re-elected without opposition. He feels incredibly fortunate to serve the people of Port St. Lucie and to be part of a team which is working hard, smart and together on the implementation of a strategic plan envisioned to make Port St. Lucie a safe, beautiful and prosperous city for all people. During his tenure, Port St. Lucie has become the seventh most populous city in Florida and enjoyed many successes and accolades, including: being named the safest large city in Florida, one of the 25 most desirable places to live in the US, one of the 12 best places to live near a beach in the US and the winner of the 2019 Voice of the People Award.

Greg is proud to be the husband of Tonia; father of Alexander, Christian and Kaitlyn; and stepfather of Aric. Some of the ways in which he likes to give back to his community include volunteering in public schools and the Adopt-A-Street Program. In his down time, he likes to read, fish, surf and garden.

Connect with the Mayor

Mayor Oravec is always grateful for citizen input and participation. In addition to utilizing emails, phone calls, meetings, Facebook, and PSL TV-20 to engage with citizens, Mayor Oravec also publishes "Direct Connection with Mayor Oravec," a periodic e-newsletter which highlights the local issues and events impacting our lives and our city.